The evolution of obstetrics in recent decades has meant that nowadays, the majority of births take place in hospitals with a rise in routine interventions. The reasons are often more related to hospital policies, the unfolding of events in the delivery room and the potential legal implications than with each individual situation. Natural births, without medical intervention or medication, are becoming more and more rare.

“Each single action, recommendation or quick procedure, no matter how small these things are for us, they so naturally accumulate that we no longer even realise that we are experiencing an intervention and what the side effects are.” (Schwarz, Stahl 2011: 8) 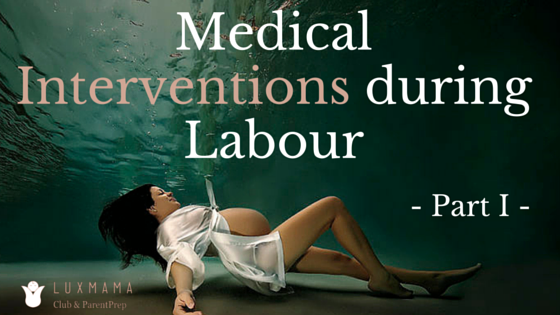 Routine examinations during labour includes the examining of the cervix. The opening of the cervix is assessed in order to judge the progress of the birth. Upon admission to hospital, the woman usually undergoes a vaginal examination to evaluate how far along the birth process is, the position of the baby’s head, and to exclude a prolapsed cord, in cases where the waters have already broken. Even towards the end of this opening phase of the cervix, the woman is examined to determine whether the cervix is fully open or not.

Generally, a woman will experience many vaginal examinations during the birth. They serve primarily a monitory function of which the midwife then records the findings into a birth log.

Vaginal examinations can interfere with the natural course of labour, in particular, when the woman in labour feels like she isn’t respected. This is more so true when the woman in labour does not know the midwife and if she and the midwife does not speak the same language. She is simply asked to undress, and lie down with her legs spread open. A vaginal examination is an intrusion into the most intimate part of a woman’s body, and should therefore be carried out only when needed and with the utmost respect and empathy. This means that the midwife delivering the baby should explain exactly what she proposes to do and why the examination makes sense before doing anything. The woman should also be asked for her consent. The midwife should not naturally assume that every woman agrees to this investigation. Additional consideration and care should also be practised with women that have had traumatic experiences in the past, and therefore these kinds of physical examinations requires a lot of empathy.

Many women find the experience of a vaginal examination to be very uncomfortable, even painful, especially if it takes place during a pressure wave, which is only useful in the rarest of cases. Nevertheless, they simply go through the investigation, since they assume or it is conveyed to them that it is essential and non-negotiable.

In a vaginal examination there is also always the possibility that the fragile amniotic sac could be damaged, leading to a premature rupture (sometimes this is the intention of the midwife to accelerate the birth).

Both the baby and the mother should be able to benefit from the safeness of an intact amniotic sac for as long as possible, as recommended by the pioneer of natural birth Dr. Michel Odent. This French gynaecologist has been fighting for natural births. He encourages women to listen to their instincts more and criticises a medical-led birth, which should only be done in cases of an emergency. Nowadays, we often try so hard to avoid a possible emergency beforehand that we actually cause a chain reaction of interventions. Michel Odent stresses that a birth which is undisturbed allows the birth-promoting hormones to flow and act freely.

However, whilst routine tests serve a monitoring function, they could interfere with the woman’s natural flow of birth. The results of the vaginal examination may have a negative affect on the progress of a woman’s labour due to feelings of disappointment and therefore midwives need to be more tactful when commenting on the results. Women often become discouraged when they already have been in labour several hours, breathed through the pressure waves, and then receive the disappointing result of “only” a few cm dilated. This can lead to stress and the woman feels pressured, which could in turn delay the birth, or even lead to the birth process stopping and the need for even further intervention.

Pure observation of the woman in labour by an experienced midwife could reveal a lot more about the progression of the birth (mood of pregnant women, the tones, the posture, the body odour of the woman, breathing…) and does not especially disturb the woman in labour. Women need to be examined as little as possible; it should be discussed beforehand with caregivers and specifically indicated in the Birth Plan.

Giving birth to a child is something that is normal, natural, and which should be as protected, safe and intimate as possible. Too many interventions in the natural progression of birth are directly increasing the risk of potential negative consequences.

For further information, read the full report here (in German language only), www.bond.azw.ac.at/opacdata/0010063408.pdf